Andrew is the main antagonist of the chapter "Hassan's Shop" in Heavy Rain. He breaks into the convenience store owned by Hassan (the father of Reza, the Origami Killer's sixth or seventh victim) during the mission, and tries to rob his store whilst armed with a gun.

Scott Shelby, at the time of the break-in, is at the back of the store and is not initially spotted by Andrew. Scott can take any of the following actions:

Andrew does not seem to be a ruthless, hardened criminal. If Scott talks to him, he will divulge how he has a daughter named Jessica, and if Scott asks him how he thinks Jessica would react if she saw Andrew threatening to kill Hassan, it seems to hit him hard emotionally and he leaves. Also, he reacts with surprise and remorse if he shoots Scott or Hassan. If Scott is shot, he will cower and leave the store. If he kills Hassan, he appears to feel rather guilty about his actions and rushes out of the store without even trying to get the money from the register.

Andrew after noticing Scott trying to sneak up on him 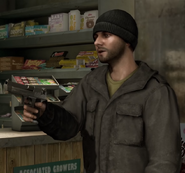 Andrew in the PS4 remaster
Add a photo to this gallery
Retrieved from "https://heavyrain.fandom.com/wiki/Andrew?oldid=26416"
Community content is available under CC-BY-SA unless otherwise noted.