Lt. Carter Blake is a police lieutenant and major antagonist in Heavy Rain. As the investigator in charge of the Origami Killer case, he works alongside FBI profiler Norman Jayden throughout the game. Blake's consistent police brutality, closed-mindedness, and self-conviction that Ethan Mars is the Origami Killer creates massive tension between him and Jayden, making him one of two secondary antagonists of the game (along with Charles Kramer).

Blake is rash, insolent, impatient, and stubborn in his pursuit of the Origami Killer; he is quick to ignore protocol, engage in police brutality (as seen in "Shrink and Punches" and "Under Arrest"), and jump to conclusions about suspects in order to close the case quickly. As such, there can be intense friction between Blake and Jayden, who insists that Blake's suspects do not fit the psychological profile, and may interfere with his more aggressive actions. Blake dismisses Jayden's analytical approach as being useless and bureaucratic; the player can decide to be similarly insulting and call out Blake's lack of progress in the case.

Regardless of the player's decisions, Blake maintains an antagonistic relationship with Jayden for the entirety of the game. His only other relationships are with fellow officer Ash and Captain Leighton Perry, for whom he seems to have some respect.

Events of the Game[]

Blake first appears in "Crime Scene," the fifth chapter of the game (and also one of two chapters available in its demo). Despite a search by Jayden and others, nothing conclusive is found -- but hints of a rivalry between Jayden and Blake are shown. He then appears in "Welcome, Norman" where he is introduced to Norman more properly. Along with another police officer, he interviews Ethan Mars about his son's disappearance; Blake does not appear to be indifferent or spiteful to Mars (as he is with Jayden), but he does appear confused by Ethan's explanation of how he disappeared.

The real rivalry between Jayden and Blake begins in Blake's next appearance, in which he directly calls out and insults Jayden's profile of the Origami Killer. Blake later assists Jayden in pursing the religious fanatic Nathaniel, whom Jayden witnesses Blake taunting and physically assaulting (and Blake may then even see Jayden kill Nathaniel). Blake accompanies Jayden in pursuing Miroslav Korda, the next suspect, in "Covered Market"; regardless of whether or not Jayden manages to catch Korda, he is ultimately proven to be innocent due to his alibi.

Ethan Mars as a Suspect[]

In "Police News," Grace Mars explains to Blake how Ethan Mars once said that he was thinking of "drowning bodies" -- the M.O. of the Origami Killer. This convinces Blake that Mars is the killer, and after demonstrating more police brutality and forcefully interrogating Ethan's psychologist, he orders the entire city's police force to search for Mars. Norman Jayden then decides to pursue his own lines of inquiry (in the chapters "Mad Jack" and "Fish Tank").

Blake (along with Jayden) leads a squad of police officers to confront and attempt to arrest Mars; depending on whether the player is or isn't able to use Madison Paige to get Ethan to safety, Blake will either succeed in arresting him or fail. If he succeeds, Jayden — convinced he isn't the killer — will later secretly break him out. Blake also makes a cameo appearance in "Manfred" if Scott Shelby fails to remove his and Lauren's fingerprints (thus getting him arrested).

Blake then tracks Ethan to a motel, where Ethan is hiding from the media. He then organizes a SWAT team to raid the motel and arrest Ethan. If Ethan escapes, then he will be able to flee; but if Ethan is arrested, then he will either be able to break free in the chapter "Under Arrest" (but only if he wasn't arrested in "Fugitive" and Norman Jayden is still alive). However, if Ethan is arrested for the second time (or for the first time whilst Jayden is dead), then he will be imprisoned for the rest of the game.

In "Solving the Puzzle," Blake tells Norman that (whether Ethan was arrested or not) since Ethan is confirmed to be the Origami Killer, that Norman's services are unneeded and insultingly tells him that he will return to the FBI. Unconvinced, Jayden — realizing that this is his last chance to save Mars since the previous victims all died after three days — uses ARI one last time to find the clues he needs.

After investigating the Blue Lagoon, Jayden notices that the gun used to kill Paco was supposed to be locked up in police evidence, meaning only a police officer could retrieve it. Additionally, while Jayden is putting together the final pieces of the puzzle with the ARI, he notices the killer is wearing a gold watch in the video footage of their fight. The watch is the same type given to officers that make lieutenant. The player is then given the option to either "investigate further" or "accuse Blake." If the player accuses Blake, he angrily questions what Jayden is doing, and the player has several more chances to drop the accusation, or pursue the accusation. If Jayden insists on arresting Blake, he holds Blake at gunpoint and threatens to turn him in, but Perry removes Norman from the investigation. (The game basically treats Norman as having "failed" the puzzle.)

If Jayden manages to crack the case, he departs from the police station to pursue the Origami Killer. Blake notices Jayden leaving, and decides to follow him with a team of other officers. However, he only appears in the following two scenarios in the final chapter:

However, in several of the news reports it is said that the Origami Killer died in a "massive police operation" despite only Norman being there. This suggests that the police response time varies between playthroughs.

If Ethan is killed by the police at the warehouse, but Norman survives, it is mentioned during the epilogue that both Blake and Captain Perry are suspended from duty pending a misconduct investigation.

If Jayden is killed, Blake will appear in "Uploaded." Perry invites Blake to Norman's funeral, but Blake declines, stating he and Jayden "didn't see eye to eye on much." Perry does not mind, and lets Blake keep his ARI glasses, stating Jayden obviously doesn't need them anymore. After a moment, Blake puts them on, and appears to be enjoying himself until a manifestation of Norman appears, terrifying him, and the scene ends. 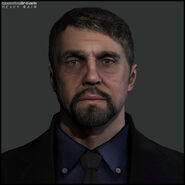