The "Church Letter" is the name given to the letter that the Origami Killer sends the fathers of his victims. It comes in an envelope addressed by a Royal 5 typewriter along with a ticket for a luggage locker at Lexington Station, in which the receiver can find a shoebox containing the items he needs to undertake the killer's trials.

The killer seems to time the mailing of each Church Letter to ensure it will reach the victim's father around the time his son disappears. Ethan Mars receives a letter in "Father and Son" at an unspecified time before Shaun's abduction, and Allan Winter received one the morning that Johnny was kidnapped. Hassan, however, received a letter after Reza was taken (as Scott Shelby learns in "Hassan's Shop"), and Susan Bowles implies in "Suicide Baby" that her husband did as well (since he disappeared the day after Jeremy did and left behind the cell phone from the shoebox).

The Church Letter reads as follows:

When the parents came home from church,
all their children were gone.

They searched and called for them,
they cried and begged,
but it was all to no avail.

The children have never been seen again. 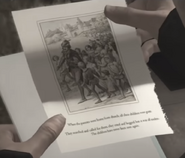 The Church Letter as it appears in the cut chapter
Deutsch
Community content is available under CC-BY-SA unless otherwise noted.
Advertisement