"Crime Scene" is the fifth chapter in Heavy Rain. It and the previous chapter are the only chapters featured in the game's demo.

In this chapter you meet Norman Jayden, an FBI agent sent to help solve the Origami Killer case. He'll use the Added Reality Interface (ARI) to analyze the crime scene and look for clues. This is the player's first interaction with the local police force and Lieutenant Carter Blake, the lead local investigator.

The player is introduced to Norman Jayden and his addiction to the fictional drug Triptocaine. Jayden exits his car and enters the crime scene. It is an open lot with train tracks running through one end and a tall embankment that leads up to a highway. The player can have Jayden use ARI (a pair of sunglasses and a glove that allow Jayden to collect and analyze evidence almost instantly) to investigate the crime scene. Jayden can also interact with local officers and the lead investigator Lt. Carter Blake. In the center of the open lot is a tent covering the victim and attempting to preserve evidence from the driving rain. Jayden's evidence gathering will lead him up the embankment to the highway (the trip up the embankment may ruin his suit if the player isn't careful). At the conclusion of the chapter, he returns to his vehicle with his collected evidence. 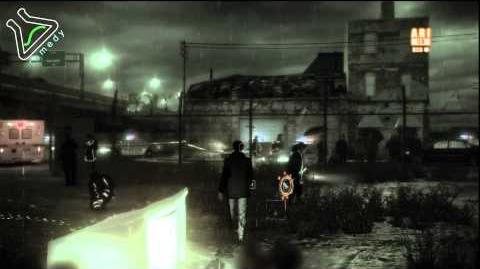