"A Mother's Revenge" is one of three possible endings to Scott Shelby's story in Heavy Rain. It is his neutral ending.

Scott is walking down an empty city street. It is still raining heavily. Lauren is standing directly in his pathway, waiting for him. As he steps forward Lauren explains that after calling every last one of the victim's families, none of them -- contrary to what Scott said in his introductory line early in the game -- ever hired Scott to find the killer. He only visited the families of his victims to destroy evidence incriminating him. Lauren says she swore on her child's grave that she would kill the man who killed him, finishing by saying she'll keep that promise. She then pulls a gun and shoots Scott in the head as the screen cuts to black, leaving her promise kept.

(Scott Shelby is walking down a deserted city street, and walks straight into Lauren Winter on his way.)

Lauren: None of the families of the victims ever hired you, did they Scott? I called every last one of them. All you did was collect the evidence you'd left behind. Wipe out the past - and feed on the misery of the parents whose children you'd killed. I swore on my son's grave that I would kill the man who murdered him. I'm gonna keep my word.

(Lauren, immediately as she finishes speaking, shoots Scott in the head with an unidentifiable gun as the screen fades to black.) 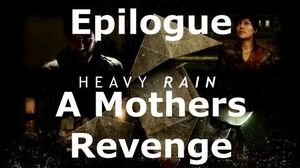