"A New Life" is the better of two possible endings to the stories of Ethan Mars and Madison Paige in Heavy Rain, which they can get if they survive and are in a relationship at the end of the game. It is the best ending for both Ethan and Madison.

Ethan, Madison and Shaun tour a condominium, which Ethan says "a friend of a friend" made available for them. Shaun quickly decides on the most suitable place for his room. Ethan mentions that if the house is good, it's theirs, to which Madison replies that it's perfect. Madison tells Ethan that they have earned their peace after everything they've done and after some time, everything will end up as a dream; it is implied that they have gotten married. Shaun then teases them both by running in between them, leading Ethan to playfully chase him around the house. Madison is left watching the pair play, laughing.

Ethan: Well, what do you think?

Madison: It's perfect, Ethan... We'll be able to forget what happened. We'll lead a normal life and one day, it'll all just seem like a bad dream. We've earned the right to be happy now, Ethan... All three of us. 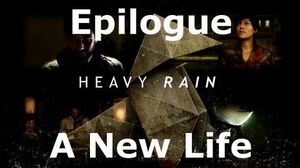