"Helpless" is one of seven possible endings to Ethan Mars' story in Heavy Rain. It is his worst ending.

Ethan is in prison, having been successfully framed as the Origami Killer by Carter Blake, with origami figures scattered all over his cell. Tortured by the loss of Shaun and unable to take the suffering anymore, he hangs himself in his jail cell. 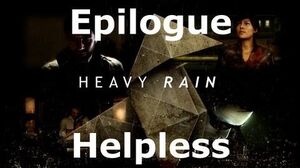