"Innocent" is one of seven possible endings to Ethan Mars' story in Heavy Rain. It is his third best ending.

Ethan is proven to be innocent. Ethan is seen being released from prison; much to his surprise, Shaun shows up alive at the police station and is happy to see his father again. Grace apologizes for what she had done and leaves Ethan to reunite with his son, who he promises never to leave again.

(Ethan is being released from prison.)

Officer: You're free to go.

(The scene transitions to Shaun and Grace greeting Ethan.)

Grace: Shaun has been waiting to see you for weeks... I thought you might like him to be here as soon as you got out... Ethan, I...I'm sorry.

Ethan: I promise son, I never will again. 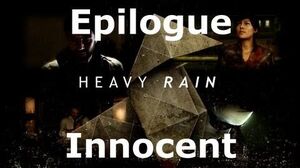