"Origami's Grave" is one of three possible endings to Scott Shelby's story in Heavy Rain. It is his worst ending.

This ending has two variants, depending on whether Lauren is alive or dead: 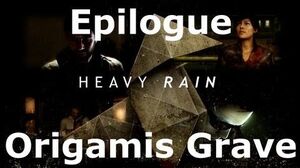