"Resignation" is one of four possible endings to Norman Jayden's story in Heavy Rain. It is (arguably) his best ending.

Norman Jayden resigns from the FBI, to the disappointment of his boss (who says that Jayden could have a very promising career ahead of him). He says that the case and his obsession with it made him lose touch with "normal life," and he needs to step back from it all. As he hands in his gun and badge he expresses doubt about ever returning to the bureau. While he is given a chance to keep his ARI (due to the fact that a new model is scheduled to be released next month), he resists the temptation, feeling that it won't help him "get back to reality."

FBI boss: Are you sure you've thought this through, Norman? You've got a promising career ahead of you, it's a pity that...

Norman: With all due respect, sir, I'm done thinking. I need to lead something like a normal life. I've just got a bit too close to everything recently. I need to step back, at least for a while.

FBI boss: Will you be coming back to the FBI?

(Norman takes his gun and his badge out of his coat pockets and places them on the boss's desk. He also takes out his ARI glasses.)

FBI boss: You can keep your ARI if you like. This one's going off-line, there's a new model due next month.

Norman: I...I think you'd better take it back. It's just a little too compelling, and it won't help me where I'm going...the real world...

(Norman stands up and starts turning toward the door.)

FBI boss: Whatever you want... I hope you find what you're looking for, Norman.

Norman: I hope so too. 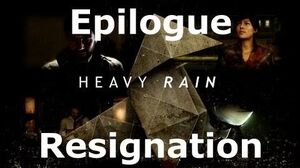