"Square One" is one of five possible endings to Madison Paige's story in Heavy Rain. It is (arguably) her worst ending.

Madison is curled up on her couch in her apartment. She ignores another message on her answering machine from Sam, who is clearly worried, as he has not heard from her in some time. Her insomnia has worsened, and intruders armed with with knives (like the ones from "Sleepless Night") dart past in the foreground, before they surround her. Madison does nothing but clutch her head as they advance on her. The camera fades out, showing that the intruders are not actually there.

Sam: Mad, it's Sam. I'm worried about you, girl... You haven't answered your phone in days. Listen, I can't pretend to know what you've been through, but I'm here for you... If you want to talk to someone about it, you know I'm here... Right, I'll try again later on... 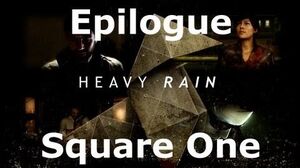