Epilogue - Tears in the Rain

"Tears in the Rain" is the worse of two possible endings to the stories of Ethan Mars and Madison Paige in Heavy Rain, which they can get if they survive and are in a relationship at the end of the game. It is the third worst ending for Ethan and the neutral ending for Madison.

Ethan and Madison stand over Shaun's gravestone. Ethan is visibly upset. Madison talks about moving away to a place where it never rains so they can both start a new life, and asks him to give her a child. Ethan cannot get past the guilt he feels about being unable to save or protect his sons. He asks Madison for a moment alone. Madison starts to walk back to the car and Ethan pulls out a gun; Madison cries out as he shoots himself. The screen then fades away as Madison cries over his body.

Madison: We'll go away from here, Ethan. Somewhere where it never rains. We'll start a new life. You'll get a job as an architect and I'll work for the local newspaper. We'll rebuild our life...and we'll finally forget.

Ethan: How can I forget that my two sons died because of me? I loved them more than anything in the world, but I couldn't protect them.

Ethan: Just give me a few more minutes Madison, I'll catch up.

Madison: I'll...wait for you in the car.

(Madison starts to walk away, but before she reaches the car she turns to see that Ethan has pulled out the gun from the Shark Trial and has aimed it at his head.)

(Ethan shoots himself and dies, slumping over. Madison rushes over to his body in shock.) 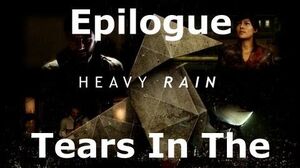