Ethan Mars is one of the main protagonists and four playable characters (the other three being Scott Shelby, Norman Jayden, and Madison Paige) in Heavy Rain, and the central character of the game overall. Up until 2009, Ethan lived an idyllic and happy life as a successful architect alongside his loving wife Grace Mars and his two sons, Jason and Shaun Mars. However, Ethan's life took the first of two tragic turns when his son Jason was hit by a car and killed. Heavy Rain, set two years later in 2011, focuses on Ethan during the kidnapping of his second son, Shaun.

Ethan is voiced by and modeled after Pascal Langdale.

Little is known about Ethan's life prior to the events of the game. Ethan garnered fame throughout his architectural career; in concept art found in the game's artbook, it is stated that he was at one point given the title of "Young Architect of the Year." At some point, Ethan married Grace Mars and later had two sons with her; Jason and Shaun Mars.

A normal day of Ethan's life is shown in "Prologue," where he helps Grace prepare for Jason's tenth birthday party. Then, in "The Mall," he and his family go shopping at a very crowded mall. Ethan agrees to watch Jason while Grace and Shaun go into a shoe store. However, Jason wanders off and finds a clown selling balloons. He begs Ethan to let him have one, and Ethan pays the clown $2 for the balloon after searching for the money in his pockets. Afterward, he discovers Jason has run off again, and searches through the mall for him. Ethan eventually finds Jason outside on the other side of the street. Hearing his father call out to him, Jason runs back across the street to him, not noticing an oncoming car. Ethan realizes the car is going to hit Jason, and he rushes toward him to try to push him out of the way. He is too late, however, and both of them are hit by the car. Ethan is plunged into a 6-month coma, while Jason is killed.

At some point after Ethan awakens from his coma, he moves into an apartment in another city. He and Grace also divorce.

Two years later, at the beginning of "Father and Son," Ethan picks Shaun up from school. During this chapter, a rift is seen between Ethan and his remaining son; Shaun is quiet and melancholy, and Ethan is plagued by guilt over his failure to save Jason. At the end of the chapter, it's revealed that Ethan suffers strange blackouts where he loses consciousness, presumably as a result of the accident. He can later tell this to his psychiatrist in "The Shrink."

During "The Park," in an attempt to relieve both himself and Shaun of the sadness befalling both of them after Jason's death, Ethan takes Shaun to the park after school. He has the opportunity to play a few games with Shaun and buy him candy. Shaun eventually asks if he can get on the carousel, to which Ethan obliges and buys him a ticket. While watching Shaun ride the carousel, Ethan blacks out and awakens later to find the park empty, and Shaun missing. The next day in "Welcome, Norman," he reports Shaun's disappearance to the police and is asked questions by Carter Blake (and possibly Norman Jayden). Afterward, he has a short conversation with Grace.

Later, Ethan finds an envelope addressed to him containing a locker ticket for Lexington Station and a mysterious letter. Discovering that a swarm of journalists has crowded in front of his house, he manages to get to his car and drive off. Once in the station, he is overcome by his agoraphobia (intense fear of crowds) that he developed after the events at the mall. He attempts to make it through the crowd, but to no avail; his stress triggers a hallucination where he sees Jason running through the station looking for him. After recovering from the hallucination, he unlocks the locker and departs, checking into the Cross Road Motel instead of returning to his house. He begins to suspect that he has developed a split personality that is taking over and making him commit the murders.

In "The Motel," Ethan opens the box he found in the locker and discovers that Shaun has been kidnapped by the Origami Killer. Fortunately, Ethan has a chance to save his son by completing trials sent by the killer; each trial completed rewards him with a set of letters that will gradually reveal the address where Shaun is being held. With this knowledge, Ethan leaves to begin the first trial.

Ethan crosses paths with Madison Paige during "First Encounter," and she becomes his confidante over the course of the game, tending to his wounds after each trial. In "Fugitive," with help from Madison, Ethan can evade being captured by the police, who suspect him of being the Origami Killer. If Ethan is caught, he will be broken out by Norman.

During the fourth trial, Ethan confronts a man named Brad Silver, whom he has been ordered to kill. Brad attacks Ethan and shoots up his own apartment to defend himself from him, but Ethan eventually corners him in a bedroom, where Brad reveals that he is a father like Ethan - the bedroom belongs to his daughters Sarah and Cindy. Ethan can either shoot him or spare him. Either way, Ethan becomes distraught over his action or inaction in his next chapter. Madison, if she is alive, arrives to comfort him, and Ethan has the choice of kissing her or not. If he chooses to kiss her, they make love. If he doesn't kiss her, Madison apologizes and leaves. If he kissed her, he will discover her notes when trying to leave, and this will lead to him arguing with Madison. Ethan then has the choice to forgive or reject Madison. Regardless of his decision, Madison leaves. After she leaves, Ethan must flee the motel to avoid getting caught by the police again. If he is caught and Norman is dead or if he was caught twice, Ethan will be in police custody for the rest of the game. If he escapes, he goes on to complete the final trial. Depending on whether or not he has completed all of the trials, he may have to guess the correct location where Shaun is held. If he completed them all, he will automatically go to the right location. In Madison's chapter "Killer's Place," if Ethan isn't in police custody, Madison can choose to call him if she found the address. If he doesn't already have the address, Madison will give it to him.

What happens in the game's final chapter, "The Old Warehouse," if Ethan makes it, depends on whether he arrived alone, with Madison and/or Norman. Then, Ethan will get an ending.

Ethan has the most possible endings (7) of any character. These are, from worst to best, all his endings.

It should be noted that Ethan will always commit suicide if Shaun dies.

During the game, Ethan must partake in five trials to obtain groups of letters of an address that will ultimately lead him to his son's location.

Ethan can develop an intimate relationship with Madison Paige, and the player later has the option of consummating their relationship. If (forgiven) Madison and Ethan survive and Shaun is saved, Ethan will be married to Madison in "A New Life" and purchase a home, the three of them living happily ever after. 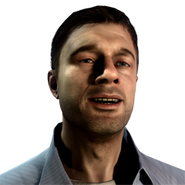 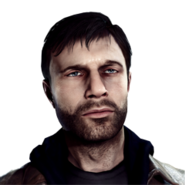 Body and profile render of Ethan Mars by Ronan Rouxel

Ethan awake from his blackouts

Ethan in the tunnel in "The Butterfly"

Ethan before the Lizard Trial

Ethan waiting for Shaun after school 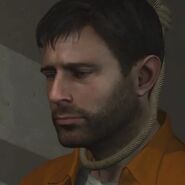 Ethan with his family in an earlier version of "The Mall"

Ethan in "The Old Warehouse"

Ethan in "The Old Warehouse"