"Eureka" is the thirty-sixth chapter in Heavy Rain.

In this chapter, Shelby and Lauren regroup after Manfred's death and uncover a fresh lead.

Scott and Lauren arrive at Shelby's apartment. Lauren asks Scott if he believes the Origami Killer killed Manfred, and he says it makes sense. She asks him if he thinks Gordi Kramer is the killer, and he replies that it might be him or one of his men because "Gordi has the time and the means, not to mention the fucked up attitude to go along with it." Also, in Scott's opinion, even though Gordi's just a suspect he looks like the guilty one.

Lauren changes the topic asking about the files on Shelby's coffee table. Scott tells her that he has been working on the case for a couple of years now and explains that the papers are lists of subscribers to origami magazines. Lauren looks at the table and asks if the killer could have subscribed to some of the origami magazines; Scott agrees but the trouble is there are over 500 names on the list.

Lauren says that she's starving and asks if Shelby has anything to eat. He offers to make scrambled eggs; she accepts his offer and takes a shower. The player as Shelby then makes scrambled eggs and puts them on a table in the kitchen for Lauren. (You can burn the eggs or serve them raw, but Lauren won't really get "emotional" about it.) When she returns to the kitchen she is wearing Shelby's bathrobe and says, "I took the liberty of borrowing your bathrobe." Scott says it looks better on her. She sits to eat and eventually they realize they can compare Manfred's list of clients against the subscription lists - a far smaller number of names to check - then focus on any names that appear on both lists. The chapter concludes with a montage of Shelby and Lauren rooting through the lists until Lauren finds the same name on both lists; excited, she hands the name to Shelby. 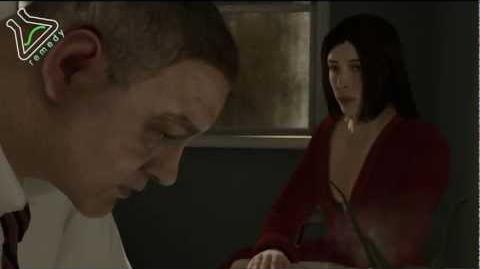