"Father and Son" is the third chapter in Heavy Rain.

This chapter takes place two years after Jason Mars' death in the previous chapter and eighteen months after Ethan's recovery from a six-month long coma. This chapter largely serves as demonstration of just how shattered Ethan's life is; his wife has divorced him some time ago, and now his second and last son is cold and distant to him.

After the loss of Jason it appears that Ethan is struggling to keep his life on track. Now separated from his wife, Grace, Ethan lives alone with Shaun in a worn and ugly duplex apartment. The apartment is sparsely kept and furnished badly and cheaply. Unpacked boxes fill corners, and Ethan's "office" upstairs is largely dusty and abandoned with the exception of a corner where a VCR and TV sit. (The player can have Ethan watch the tape in the VCR, which shows an old video of Jason and Shaun playing and Ethan asking Jason what he wants to be when he grows up. Ethan will break down briefly after watching.) Ethan's employment status and income are never brought up; considering he was comatose for six months it is possible he is on some kind of unemployment or disability.

Ethan has joint custody of Shaun and cares for him during the week. Ethan has a schedule for Shaun written out on a chalkboard in the kitchen. Following this schedule as well as getting medicine from the bathroom for Shaun when he sneezes and retrieving his teddy bear from the laundry room when putting him to bed will earn a trophy.

The chapter outlines a distinct rift between Ethan and Shaun. Throughout, they barely talk; Shaun prefers to watch television rather than engage with his dad. When questioned, Shaun is reticent, keeping conversation to a minimum. Ethan is wracked with guilt and frustration over his relationship with Shaun and failure to save Jason.

It is up to the player to make choices on how best to tend to Shaun's needs. The player can neglect Shaun entirely, or impose a schedule of homework, dinner, and then a suitable bedtime upon him.

Once Shaun is put to bed, the chapter concludes with Ethan suffering from seizure-like symptoms in his home. After blacking out, he awakes suddenly to find himself outside in the rain, unaware of how he got there, clutching a small origami figure. 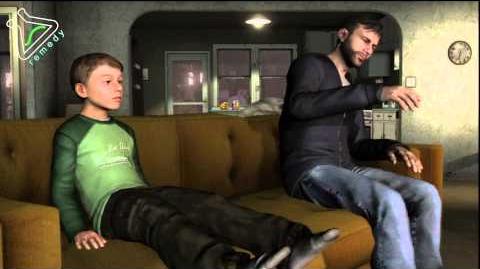