"Hold My Hand" is the forty-ninth chapter in Heavy Rain.

In this chapter, the end of John Sheppard's story is revealed.

This chapter is a flashback continuing from "Twins." John Sheppard is still stuck in the pipe filled with fast-running rainwater while his unnamed brother holds his hand. John's brother leaves John to get help. He runs home to their abusive father, who has continued drinking after chasing the boys off for the day. The boy desperately tries to get his father to come save John, and even resorts to trying to physically pull his father along. The drunk shoves the boy away, declaring that his brother's death will mean "one less greedy mouth to feed."

Dismayed and heartbroken, the boy returns to John, who can barely keep his head above water. The boy pleads with him to hang on and not die, but John is running out of strength and can only mutter "Don't forget about me, Scottie." Scott Sheppard helplessly watches his twin brother drown while holding his hand. 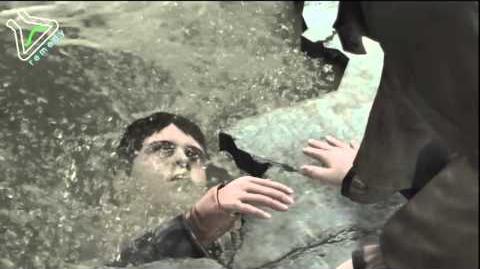