"Kick Off Meeting" is the fifteenth chapter in Heavy Rain.

In this chapter, Norman presents his profile of the Origami Killer to Lieutenant Blake and Captain Perry.

Norman presents his profile of the killer. During the presentation, Lieutenant Carter Blake will make several aggressive and derogatory comments, to the effect that he clearly finds this approach to the case a waste of time. The player can choose to ignore Blake or talk back to him; neither option affects the plot. While most of his information is generic profiling of the killer's motives and modus operandi, it does reveal one important new aspect: the victims always die when the rain level reaches 6 inches, give or take 10 percent. They are probably drowned in a well or drain with open access to the sky. This annoys Blake, who argues that analytical work is no substitute for working the streets.

Norman can calmly say that the killer is too intelligent to be caught by those methods, or mockingly call Blake out on his failure to apprehend the killer so far. Either way, Captain Perry stops an infuriated Blake from starting a fight. He asks Norman how long they have before the next victim dies, to which Norman estimates they might have less than 72 hours. 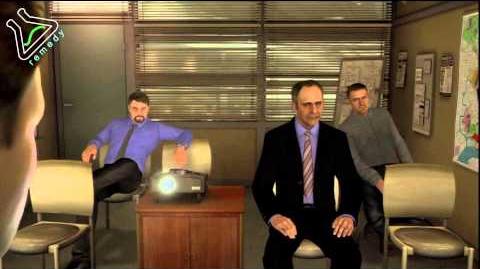