"Kramer's Party" is the twenty-second chapter in Heavy Rain.

In this chapter, Scott Shelby and Lauren Winter visit the Kramer mansion, where Gordi Kramer is throwing a party. Scott questions Gordi about his involvement in a suspicious incident that may implicate him as the Origami Killer.

Shelby attempts to convince Lauren to stay behind; after she puts her foot down they both enter Kramer's mansion. Shelby's goal is to confront the scion of the Kramer family, Gordi Kramer. To do so, he must get past two guards blocking a staircase that leads to the rest of the house and Gordi's private section of the party. Shelby talks to the guards, then he either enlists Lauren's help (she'll fake an overdose, collapse, and distract the guards so he can get upstairs) or tricks a friendly drunk into starting a brawl to draw the guards away from the staircase. Once upstairs, Shelby locates Gordi Kramer. Kramer gives evasive answers to Shelby's questions, then orders two of his bodyguards to take care of the detective. Shelby either defeats the guards or is beaten and ejected. Either way, Shelby and Lauren leave with no clear answers. 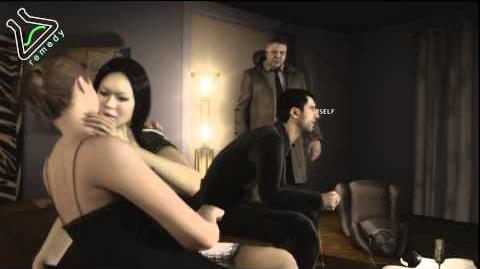