Head of the Homicide Division

Capt. Leighton Perry is a police captain and the head of the Homicide Division of the City's police department. Like his subordinate, Lieutenant Carter Blake, Perry is unsubtly disdainful of Norman Jayden's presence, telling him frankly upon their first meeting that he feels the FBI's interest in the case is unnecessary. He shows much more favor toward Blake's forceful practices than he does toward Jayden's analytical approach, stating that Blake "has his own methods, but he's a good cop." He is somewhat more reasonable than Blake, as when Norman presents his profile he respectfully listens and silences Blake's angry outbursts. Nonetheless, it is obvious his interests lie more in his relationship with the press and having the Origami Killer investigation come to a close than finding the true killer, as he simply accepts Blake's conviction that Ethan Mars is the killer despite the lack of real evidence.

In the extended version of "Jayden Blues" (if Ethan is arrested in "Fugitive"), Jayden complains to Perry about Blake's violent interrogation; Perry simply reasons that saving Shaun Mars' life justifies violating a suspect's rights - a means to a greater end. In "Under Arrest," Perry calls a press conference announcing the arrest of the Origami Killer without having gotten a confession from Ethan - ironically, it is Blake who objects to this, albeit halfheartedly.

Events involving Jayden and Shaun have an impact on Perry late in the game and during the epilogue. If Jayden decides to accuse Blake of being the Origami Killer, Perry removes him from the case. If Jayden dies during the course of the investigation, Perry unenthusiastically attends the funeral, although he allows Blake to avoid it - he also lets him keep Jayden's ARI glasses. If Ethan is shot by the police at the warehouse while Jayden is alive, there is a brief mention during the epilogue that both Blake and Perry are being suspended for an unspecified period of time pending investigation. If Shaun dies, the news report will mention that Perry has resigned from the force. 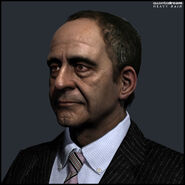 Perry talking to Jayden
Add a photo to this gallery
Retrieved from "https://heavyrain.fandom.com/wiki/Leighton_Perry?oldid=26410"
Community content is available under CC-BY-SA unless otherwise noted.