Madison Paige is one of the main protagonists and four playable characters (the other three being Ethan Mars, Norman Jayden, and Scott Shelby) in Heavy Rain. Madison is a young journalist living alone in the city. Suffering from crippling insomnia and nightmares, she often finds herself checking into local motels for the night - the only place she can relax and sleep in. She is also the star of The Taxidermist, the first DLC for Heavy Rain.

Madison's motion capture is provided by the British model Jacqui Ainsley, and her dialogue is done by two different American actresses: Judi Beecher in Heavy Rain and Barbara Scaff in The Taxidermist.

Little is known about Madison's life before the events of the game. In fact, in a developer video that explained some plot holes in the game, it is even admitted by the narrator that Madison is one of the game's most enigmatic characters. It's stated during the game that she was born on May 3, 1984, making her 27 years old during the events of the game which is set in October 2011. She does explain to Ethan, however, that she grew up with several brothers and would always be the one to tend to their injuries whenever they got into trouble. She also states she has had insomnia since she was a little girl in response to an inquiry from Ethan about it after the events of "Fugitive" and possibly "Under Arrest." However, she only gives this statement when choosing "Lie" in response to Ethan's inquiry, which implies her statement is false.

If Madison goes to the warehouse alone in "The Old Warehouse" chapter, she may tell the Origami Killer (whom she knew at the time to have had a troubled past with their parents) that there is nothing harder than not being loved by one's parents, suggesting she may have had a bad relationship with her father or mother.

Madison is introduced in the eleventh chapter of the game, "Sleepless Night," the latest of any initial appearance. She wakes up at 2 a.m., tired and suffering from insomnia. She notices a series of strange goings-on in her apartment as if someone is there. Suddenly, a gang of intruders appear and ambush Madison. Madison will always end up being defeated by them, and will "die" - before this is all revealed to be a nightmare.

Madison will then check into the Cross Road Motel in the "First Encounter." She meets Ethan Mars for the first time in this chapter, and tends to his wounds from "The Bear." She later nurses him again after his wounds from "The Butterfly." In "Fugitive," Madison must help Ethan escape from Carter Blake and Norman Jayden; failure to do so will result in Ethan being imprisoned (only to be broken out by Norman later). During these chapters, Madison will learn about the Origami Killer and begins seeing how he has forced Ethan to do a series of trials for his son's sake. She now begins her own investigation into the killer.

In "The Doc," she confronts Adrian Baker, who is the legal owner of the apartment in which "The Lizard" takes place. Unfortunately, Madison will engage in a fight with Baker - in which she can end up killed - if she doesn't find the evidence she is looking for and get out. Whether she fights Baker or not, she will find evidence pointing her in the direction of Paco Mendez at the Blue Lagoon. In "Sexy Girl," Madison will go to Paco's office, and she will have no choice but to do a striptease (removing at least one article of clothing). Madison cannot die in this chapter. She will also appear briefly at the start of Norman's chapter "Fish Tank" if she is alive.

In Ethan's chapter "On the Loose," if she is alive, Madison will come to Ethan's motel room to sit with him and discuss how he did or didn't kill a man to save Shaun Mars. Either way, Ethan will have the choice of kissing Madison. If he doesn't, Ethan will push Madison away, and she promptly leaves. If he does kiss her, then they make love. Ethan wakes up the next morning and finds that Madison has taken photos and started a story about him possibly being the Origami Killer (thus learning she is a journalist). After hearing Madison claim that she was planning to quit after seeing the emotion in the story, Ethan can either reject or forgive her. Either way, Madison leaves the building, and notices Carter Blake and the cops outside. She can either get on her bike and exit or call Ethan from the motel's lobby. Ethan will then proceed to be arrested or escape.

In "Ann Sheppard," Madison goes to visit Ann Sheppard, who is suffering from Alzheimer's. Either way, she will be able to get her to divulge the Origami Killer's identity, Scott Shelby. She will then go over to his apartment in "Killer's Place." She will go into his secret room, and must find out the password to find Shaun. After finding Shaun's address, Scott finds Madison, points a gun at her, and sets the apartment ablaze after driving her back into the room, forcing Madison to find a way out. Staying in the fire too long, or jumping out of the first two windows seen will kill her. The player must jump out of the safety window or hide in the fridge in order to survive. If she finds the address, she will get the ability to inform either Ethan or Norman about it.

What happens in the game's final chapter, "The Old Warehouse," if Madison makes it, depends on whether she arrived alone, with Norman and/or Ethan. Then, Madison will get an ending.

Madison has 3 epilogues, and also appears in 3 of Ethan's epilogues. 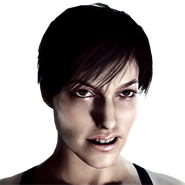 CG of Madison in her undergarments

The American Tribune, the newspaper for which Madison works

Madison in a promotional image

Madison's dance at the Blue Lagoon 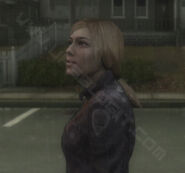 An early model of Madison

Madison with Paco in his office

Madison stripping for Paco in his office