"Manfred" is the thirty-second chapter in Heavy Rain.

In this chapter, Lauren Winter and Scott Shelby attempt to track the envelope sent by the Origami Killer.

Manfred is an old friend of private investigator Scott Shelby who runs an antique repair shop. Shelby visits him to see if Manfred can identify the typewriter that printed the addresses on the envelope that the Origami Killer sent to Allan Winter. Manfred is surprised, yet pleased to see Shelby. The two then share a drink together.

Afterwards, Manfred tells Lauren and Shelby that the typewriter used by the killer is a "Royal 5," which was in production from 1907 to 1924. He says that he bought the entire stock of spare parts for the Royal 5, and thus is the only person who can do repairs for that model. He offers to retrieve a list of his Royal 5 customers. However, while searching for the list in the back room, Manfred is murdered by the Origami Killer. Shelby has to quickly remove any fingerprints that could link Lauren or him to Manfred's death before the police and paramedics arrive. 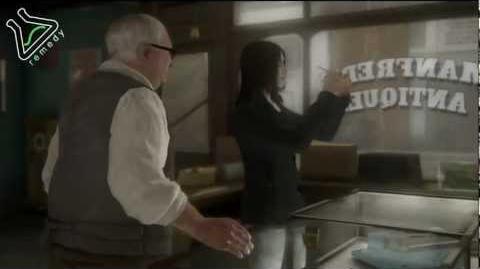