"Nathaniel" is the sixteenth chapter in Heavy Rain.

In this chapter, Agent Norman Jayden and Lieutenant Carter Blake investigate the home of Nathaniel Williams, a possible suspect in the Origami Killer case.

Agent Norman Jayden and Lieutenant Carter Blake arrive at Nathaniel's apartment, but to their surprise, Nathaniel isn't home. Blake forces his way in over Jayden's objections. Much to Norman's surprise, the apartment is filled with crosses, Bibles, and lit candles. Blake mentions that Nathaniel is a "God fearing idiot" and he believes Blake is the "Anti-Christ" who has come to Earth to persecute him.

After Blake and Jayden search the apartment, Nathaniel returns with groceries. Jayden asks him a few questions about one of the victims of the Origami Killer. Nathaniel says "As God is my witness, I haven't done anything wrong. I'm innocent." After a few minutes of questioning, Carter starts to mock Nathaniel about the "voices" he's been hearing. Jayden realizes that Nathaniel fears Blake. Blake continues haranguing Nathaniel, asking him if God told him to drown all those children, and Nathaniel begins to crack under Blake's tirade despite Jayden trying to stop him. Blake then assaults Nathaniel. Pushed too far, Nathaniel pulls out a gun; Nathaniel truly believes Blake is the "Son of Satan" and shouts at Blake to leave him alone. Jayden draws his weapon and holds Nathaniel at gunpoint.

The player as Jayden has the option to either shoot Nathaniel or calm him down. If the player successfully calms him down, Blake moves to arrest him. As Nathaniel turns around he quickly pulls an object from his coat. At this point, the player can once again shoot Nathaniel. It is then revealed that Nathaniel was reaching for a cross and not a weapon. The chapter ends shortly after.

Note that no matter what you do, Nathaniel will never fire his gun. If Jayden shoots Nathaniel, he will regret it and will look at Nathaniel's body, ashamed of himself for killing him. 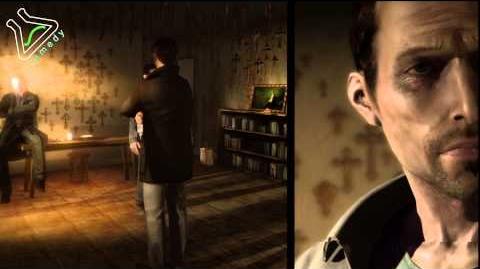