"Paparazzi" is the twelfth chapter in Heavy Rain.

This chapter opens with Ethan Mars at his home - after news reporters get word that Ethan reported Shaun Mars missing, the paparazzi are all parked outside.

At the start of the chapter, Ethan is sitting at his kitchen table. He is exhausted and thinks about what could have happened to Shaun. He opens and reads a mysterious letter.

When the parents came home from church,
all their children were gone.

They searched and called for them,
they cried and begged,
but it was all to no avail.

The children have never been seen again.

Saddened and confused by the letter's message, Ethan looks in the envelope and finds a ticket to a train station luggage locker. He realizes he has no choice but to find out what the locker holds. At the same time, he suspects he may be to blame for Shaun's disappearance and the other killings. He has realized his blackouts and the killings may be linked.

Now the player has the choice on how Ethan gets to his car. He can leave through the front door and push past the crowd in front of his home, or leave through the back door and sneak around the back alley. Whatever you choose, Ethan makes it to his car and drives toward Lexington Station. 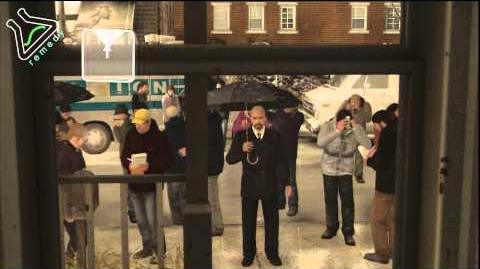