"Prologue" (often referred to as "the prologue") is the first and introductory chapter in Heavy Rain.

The player is first introduced to Ethan Mars, the main character/protagonist of the game. Ethan is an architect who is married to Grace and is the father of two boys, Jason and Shaun. This chapter serves two purposes: one, to be a gameplay tutorial; and two, to explain the basic premise of the storyline (before the story really starts in the next chapter).

This chapter is also meant to show Ethan's relationship with his sons before future events.

Upon awakening, the player takes control of Ethan and is given several minutes to come to grips with character movement and how to interact with the environment in the Heavy Rain world.

Players can be as thorough or as cursory as they wish whilst guiding Ethan around the home. Keen players can engage Ethan in many activities, including brushing his teeth, showering, playing a radio, finishing an architectural concept drawing (required for the trophy of this chapter), playing with a remote controlled car, drinking coffee and orange juice, and getting dressed, whilst less enthusiastic players can simply await the return of Ethan's wife, Grace, and his two sons Shaun and Jason. The player's level of involvement in the activities available has no visible effect on the story.

Once Grace and the children arrive, it is up to the player to prepare for Jason's birthday by setting the table (which is required to earn a trophy). Afterward, the player can engage with Grace in a romantic moment and play with Jason and Shaun in the backyard.

The chapter ends when Grace calls her husband and sons to the table to eat lunch, only to discover that Shaun is missing. The player must guide Ethan upstairs to find Shaun huddled over Merlin, the family's pet who has died (quite recently, as it was singing and healthy when Ethan first awoke). Ethan attempts to comfort him and the chapter ends. 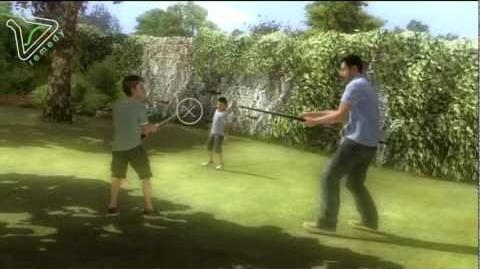