Scott Shelby is one of the four playable characters (the other three being Ethan Mars, Norman Jayden, and Madison Paige) in Heavy Rain. A former United States Marine and police lieutenant, Scott has worked as a private investigator since his retirement from the police force. Over the course of the game, his primary goal is to find evidence about the Origami Killer. Scott's partner throughout the game is Lauren Winter, a prostitute whose son was one of the Origami Killer's victims.

Scott Shelby is voiced by and modeled after Sam Douglas.

One day in 1977, Scott and his brother are thrown out of their trailer home by their drunken and abusive father who demands that they leave. Not minding the rain, the twins decide to go and play at the nearby construction site. After a while, the two decide to play hide-and-seek, and John runs to hide. Moments after, Scott hears John calling out for help and finds him caught in an open pipe full of water. He attempts to pull him out, but to no avail. With the water rising, the area deserted, and their mother far away at work, Scott runs to his father as a last resort and begs for him to save his brother. However, he merely throws Scott onto the ground and yells at him to go away, claiming that if John dies, it will be "one less greedy mouth to feed." Scott runs back to his twin and apologizes, begging for him not to die. John mutters his last words - "Don't forget about me, Scottie." - and drowns while holding his brother's hand.

Sometime after John's death, Scott is taken away to be put in a foster home where he is adopted by the Shelby family, which his mother described as being "nice." In his adult years, he becomes a U.S. Marine and then an officer at the local police force, eventually working his way up to the rank of lieutenant. He retires at middle age and decides to become a private investigator.

Shelby suffers from asthma as illustrated throughout the game (though is dexterous enough to cope with an armed robber at a convenience store and survive a shoot-out with several men). Depending on the player's choices, Scott has the potential to kindle a relationship with Lauren Winter. It is also revealed when Lauren offers him a cigarette, Scott tells her, "No thanks, I quit," informing the player that he used to be a smoker.

Scott's persona consists of being quiet, organized, vigilant, and highly introverted, hardly ever talking about himself to others. Being someone who listens to others, methodical in work, straight-eyed, determined, and able to cope under pressure makes Scott Shelby an effective private investigator, allowing him to assess human behavior and perceive clues other people may miss.

His previous employment before becoming a P.I. was that of a lieutenant for the local police force. As shown when Shelby is brought in for questioning, it seems that he once knew Carter Blake whilst working as a cop, and that they appear to have a friendly relationship because of it.

Case of the Origami Killer[]

Scott's first appearance in the game is in the fourth chapter, "Sleazy Place," wherein he visits the motel in which Lauren Winter lives. During the conversation with Lauren, he reveals that he is a private detective hired by the families of the Origami Killer's victims to apprehend the killer. Here, he can either convince or fail to convince the apathetic Lauren to give him information pertaining to her son's death and the disappearance of her son's father. Regardless, Scott has an asthma attack right after he leaves; during the attack, some guy goes into Lauren's room. After hearing some screaming, the player is given a choice: go help Lauren or leave. Either way, it has no major effect on the story.

Soon after, Scott appears in "Hassan's Shop" with the same goal: to ask the owner questions pertaining to the killer's assault on his son Reza. The player will always fail to get him to talk. As Scott is in the back of the store buying asthma inhalers, a robber bursts into Hassan's shop and places him at gunpoint. In order to get Andrew to stop the robbery, Scott must either knock him out or convince him to leave. Failure to do so will result in either Hassan being shot and killed, or Scott being grazed in the shoulder by a bullet from Andrew's pistol.

When Scott goes to Susan Bowles' house to try to ask her questions about her son Jeremy Bowles (who is the victim identified in "Crime Scene"), he finds her daughter left helpless in her stroller and that Susan unsuccessfully tried to commit suicide. Scott revives Susan and takes care of Emily before leaving.

In the chapter "A Visitor," Lauren Winter visits Scott, and tells him of an envelope that her husband left before he walked out. She then insists on becoming partners with him, to which Scott reluctantly agrees.

In the chapters "Kramer's Party" and "The Golf Club," Scott and Lauren try to interrogate Gordi Kramer and his father Charles Kramer respectively, but to no avail. In their next chapter, "Manfred," Scott and Lauren go to Manfred's antique shop only for him to be killed at the scene. Scott must then wipe the fingerprints from everything they touched. If Scott misses any, he and Lauren will be at the police station, where he is interrogated by Ash. Before leaving, he runs into Carter Blake. Back at his apartment, after a day of looking over evidence, Scott goes to the cemetery with Lauren to search for John Sheppard, who died at Carnaby Square when his brother failed to find him help. While leaving, Scott and Lauren see Charles Kramer putting flowers on John's grave.

During "Trapped," Scott returns to his apartment to find Lauren held captive by Charles Kramer and two of his bodyguards. Kramer then has them knocked unconscious, trapped in a car, and dumped in a lake. Scott will always escape, but Lauren can die if Scott leaves her or takes too long to escape; whether or not she survives depends on Scott's actions. Either way, Scott launches a retaliatory assault on the Kramer mansion in "Face to Face" and shoots his way through Kramer's bodyguards to reach his office; if he succeeds, Kramer will have a heart attack after they talk, and Scott will have to choose between letting him die or giving Kramer his pills to save him. If Lauren is still alive, Scott will briefly drop her off at Lexington Station in "Goodbye Lauren" and kiss her goodbye.

All of this evidence is seen during flashbacks in "Origami Killer" and thrown into a burning trash bin. It is implied that, during the course of the game, Scott's real goal was to obtain all the evidence from the victims' families in order to cover his identity, disguising himself as a private detective to get the evidence from the families by simply asking for it. Then, Madison Paige will break into Scott's apartment (if she survived the fight with Adrian Baker). After finding Shaun Mars' address in a secret room, Madison is held at gunpoint by Scott, who locks her in the secret room, flees the apartment, and sets the place on fire (efficiently disposing of all evidence and the only witness at once). Madison will suffocate if she takes too long to escape the secret room, burn to death if she catches fire and fails to extinguish herself, fall to her death if she jumps out the living room window, or die in an explosion if the fire reaches the propane tank on Scott's desk. Her only way to survive is to hide in the refrigerator or jump out of the kitchen window and escape the apartment.

Scott will then appear at "The Old Warehouse" if at least one of the other three characters made it there. He may or may not die here. Then, Scott will get one of the following three endings: 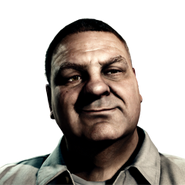 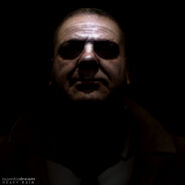 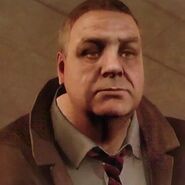 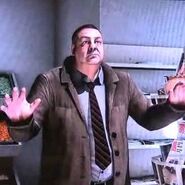 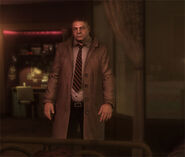