Shaun Mars is the second son of Ethan and Grace Mars, and the younger brother of Jason Mars. After the death of his older brother, his parents divorced and now have joint custody over him.

Shaun appears disconnected from his father and other people in general. He seems melancholy, preferring to watch TV rather than talk to or play with his father. He also does not take the initiative to play on the playground, whether it be playing by himself, with other children, or with his father. If Ethan instigates the playtime, Shaun will likely join in and enjoy himself. Shaun frequently mentions his brother Jason, and how he wishes his life was still the same as it was when Jason was alive.

During the chapters "The Park" and "Where's Shaun?," Shaun is kidnapped by the Origami Killer and Ethan Mars is left to find him. He discovers that the killer has sent him a cell phone and five origami figures. Each figure reveals a different address, and each represents a trial, a task that entails pain, risk, and/or sacrifice. If the trial is completed successfully, the video card unlocked will grant Ethan a live feed video of Shaun and will unlock letters in a hangman-style game. (Completing all trials unlocks the full address.)

Shaun is rescued in the final chapter of Heavy Rain, after Ethan, Madison, or Norman find the Origami Killer. They rescue Shaun from the well in which he was imprisoned, and after a brief CPR session, Shaun awakes. 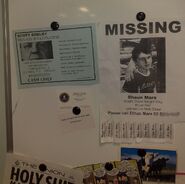 Promo art of Scott and Shaun

Shaun as seen in "Prologue" 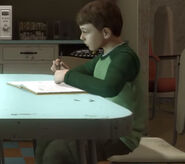 Shaun doing homework as seen in "Father and Son" 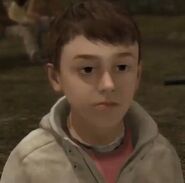