"Sleazy Place" is the fourth chapter in Heavy Rain. It and the next chapter are the only chapters featured in the game's demo.

Scott enters a run-down extended-stay motel in search of Lauren Winter, a prostitute and the mother of Johnny Winter, a victim of the Origami Killer. He bribes the property manager to find out which room she's in. Shelby can knock on three different apartment doors other than Lauren's: one in which a woman orgasms (so it is occupied due to "private business"), one that leads to an apartment with no one inside, and one in which a man is coughing.

Once the player knocks on Lauren's door, she tells him to put his money on her table, believing Scott to be a customer. She begins to take off her robe, but notices Shelby just standing there and tells him to take his clothes off. Shelby tells her that he's not a customer; he is a private investigator and wishes to inquire about the circumstances under which Johnny disappeared, in the hope it will provide some clue in unmasking the identity of the Origami Killer.

The player must work strategically in order to successfully convince Lauren to divulge information, as she is distressed and not readily willing to help Scott. She mentions that her son lived with her and that he was best thing that ever happened to her. She wanted to stop turning tricks, but she needs the money to move out of the place where she is living. Depending on the player's decisions, this chapter can have several outcomes, but ultimately Lauren tells Scott to get out. He leaves the room and has an asthma attack. After taking his medicine, he sees one of Lauren's ex-clients barge into her room. Soon after, Lauren cries out as the client presumably starts abusing her.

The chapter also introduces a new interaction sequence style for the player, in the form of Quick Time Events (QTEs). This technique requires the player to mimic commands displayed on the screen quickly and accurately in a sort of visual "Simon Says," where it pitches the decision to the player to intervene and stop Troy from abusing Lauren or not get involved and walk away.

If the player decides to intervene there will be a fight scene between Scott and Troy, which can either be won or lost, though it doesn't really affect the overall storyline of the game.

If the player should have Shelby win the fight against Troy, before the latter leaves, he says an empty threat to the former where he says: "I'll see you again, asshole!"

However, regardless of the player's choices, the chapter ends with Scott leaving the apartment after leaving his business card on the kitchen table in the hope that Lauren will contact him. 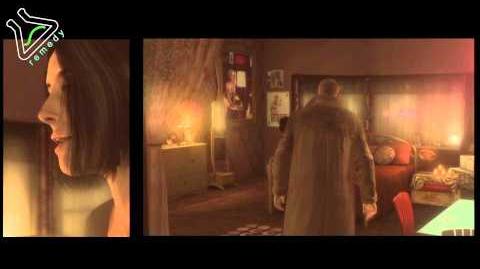