"The Bear" is the eighteenth chapter in Heavy Rain.

In this chapter, Ethan Mars undertakes the first of the five trials that he has to complete in order to save his son Shaun.

Written inside one of the origami figures in the shoebox is an address and instructions to go there with a pickup card. The address is for Joe's Garage and Parking Lot, at which Ethan presents the card to a mechanic who gives him the keys to a car. The car's GPS directs Ethan to a bridge over a highway and instructs him to drive against traffic for 5 miles. If he successfully reaches his destination in 5 minutes or less, he will receive a chip for his cell phone.

Unlike the other four trials in this game, the player has no option to decline this trial. There appears to be an option to do so prior to initiating the real trial, but if chosen nothing occurs and the only remaining option is to proceed. This is also the first chapter that has an impact on the game's ending.

Bears are typically a shy and easily frightened species; however, if a mother bear believes that her cub is threatened, she will violently and fiercely defend her young. This reflects Ethan's aggressive determination to save Shaun, as well as the drive against the traffic mirroring the bear's charge. Courage (the requirement of this chapter) is also needed to face bears. 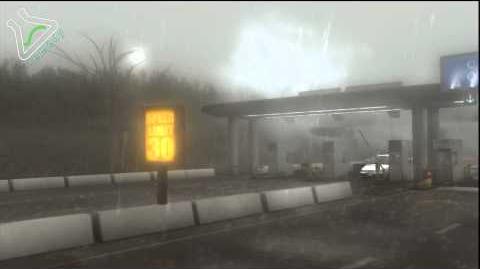