"The Butterfly" is the twenty-third chapter in Heavy Rain.

In this chapter, Ethan Mars undertakes the second of the five trials that he has to complete in order to save his son Shaun.

Ethan arrives at an abandoned power plant. His wounds from "The Bear" have been tended by Madison Paige in "First Encounter." He finds a way into the plant by following images of a butterfly painted on the building, or entering through a hole in the fence to the left of his car. He finds a hatch and after opening it finds a long narrow tunnel that is just barely big enough for an adult male to crawl through. At the beginning of the tunnel lies a matchbox. Ethan takes the matches and lights one, using it to examine the tunnel. Finally, he climbs in and crawls into the darkness.

A few feet in, the hatch shuts behind Ethan, and he begins to have second thoughts. He keeps crawling, until something cuts his arm. He looks down and realizes he is facing a carpet of hundreds of pieces of broken glass through the length of the rest of the tunnel. The player must try to move slowly in order to keep the pain at a minimum. If at any time the player's pain gauge (shown by a red, pulsating aura surrounding the screen) reaches a maximum, Ethan passes out and is shown exiting the tunnel and failing the trial. Should this occur, he gasps an apology to Shaun and the chapter ends.

When Ethan escapes the glass-filled tunnel, he finds another, smaller tunnel. Ethan gets in and slides down it at a dangerous speed until he is dumped out of it onto a ledge above live electrical capacitors filling a large room in a grid.

The player can now choose to walk out of a door labeled "Coward," quitting the challenge and failing to retrieve the second set of letters, or they can begin moving through the electrical capacitors. If Ethan is shocked too much, indicated by the same pain gauge as in the tunnel, he will give up and leave through the "Coward" door. If Ethan makes it to the other side, he receives another chip for his phone. It adds more letters and shows another video of Shaun. Ethan walks out, finishing the Butterfly Trial and heading to the motel for the third trial.

The origami references the fragility of butterflies and how they can be easily injured. Insects are also known to travel toward bright lights. In some cultures, butterflies are believed to be the souls of the dead passing onto heaven, similar to how Ethan must go through these fiendishly difficult trials for his son's salvation. Another reason this chapter may be named the butterfly is how Ethan must crawl through a narrow tunnel, resembling a butterfly's ability to move through very narrow situations (and how butterflies would be able to easily go through the electrical capacitors). 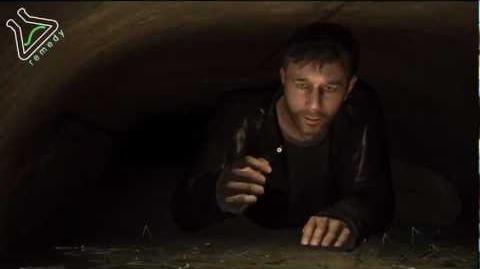