For the location, see mall.

"The Mall" is the second chapter in Heavy Rain.

After the last chapter (which introduced the characters and was a gameplay tutorial), Ethan Mars and his family go to a bustling mall. However, the storyline of Heavy Rain is set in motion when a major event happens at the mall.

The chapter opens with the Mars family on an outing to a shopping mall. Playing as Ethan, the player takes charge of Jason at Grace's request whilst she and Shaun buy shoes. It is during this short conversation that Jason begins to wander off.

By guiding Ethan around the mall, the player can locate Jason near a balloon vendor, dressed as a clown. Ethan tells Jason not to wander off like that then buys him a red balloon. While Ethan pays for his purchase, Jason deserts his father once again. Alarmed, Ethan starts to search for Jason and runs into Grace, who is concerned by how crowded the mall is. Ethan tells Grace that Jason wandered off, then tells her to stay put with Shaun while he finds Jason.

Using the balloon as a way of identifying Jason amongst the rapidly growing crowd, the player must guide Ethan to a series of red balloons found within the environment. To Ethan's dismay, none of them belong to Jason.

Pushing through the crowds one last time and nearing the exit, Ethan sees Jason's balloon outside and across the street. Ethan calls out to Jason, who turns and starts to walk toward Ethan. Ethan sees an oncoming car and tries to stop Jason. Ignoring or not hearing his father's warning, Jason charges forward. Ethan races to save Jason; he manages to grab his son and pull Jason toward him as both are struck down by the car. Grace arrives in time to see Jason and Ethan struck; as she drops to her knees and begins to cry and shout Jason's name repeatedly, Shaun looks on shocked and slack-jawed. The camera follows Jason's red balloon as it rises into the sky and the chapter ends.

* The killer is not visible in the footage shown during this chapter, but it is revealed in the final chapter that he is a member of the crowd watching as Ethan and Jason are hit. 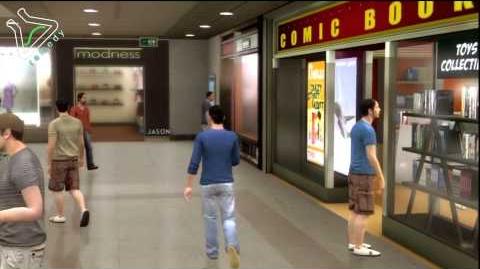