"The Motel" is the fourteenth chapter in Heavy Rain.

After receiving the box from Lexington Station, Ethan checks in at a motel to find out what the box contains.

Ethan is sitting in a chair in his motel room, thinking about whether or not he should open the box. All options lead to him opening the box. When he does, he discovers the contents are five numbered origami animals, a cell phone, a memory card for the phone that has his name written on it, and a loaded gun. Ethan realizes that the Origami Killer has Shaun, and inserts the memory card in the phone.

The card then plays a video of Shaun in a drain that is steadily filling with rainwater. Shaun calls desperately for his father's help and the video ends. A message asks, "How far are you prepared to go to save someone you love?" It then continues, "Five origami figures. Each figure is a trial. Each trial provides letters. The letters reveal an address." Ethan checks the first origami piece, which reads, "Are you prepared to show courage to save your son?" and reveals an address. Ethan grabs the origami figure, the phone, and the gun, then heads for the first trial. 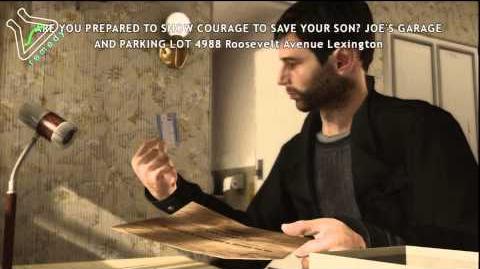