This article lists all fifty-seven trophies available in Heavy Rain and the methods for acquiring them.

Since the game is a mystery interactive drama, it is recommended to complete at least one playthrough before reading below. Looking up hidden trophies in advance could seriously degrade initial gameplay experience.

Acquisition: Finish the drawing, set the table correctly, and play with Jason and Shaun outside.

Sometimes, you will get this trophy after finishing "Father and Son" alongside the "Good Father" trophy; if it doesn't appear instantly after completing "Prologue," try it this way.

Acquisition: Follow Shaun's schedule (chalkboard in the kitchen) as closely as you can. There is a clock in the living room and another in the kitchen. When he goes to bed, bring him his teddy, which is in the laundry room, and tuck him in.

Acquisition: Follow Troy into Lauren's apartment after using your inhaler. A fight scene will occur. You must perform the majority of the button sequences correctly.

Acquisition: Get Lauren Winter to talk about her son by choosing "compassionate," then "trick" when the option comes up.

Acquisition: Find all the clues related to the Origami Killer. Examine the body and the surrounding area. Make sure to follow the orchid pollen and work your way up to the top of the hill, where there are tire tracks and some rude drivers.

There are ten clues:

To find the last two clues you have to climb a hill. Start near the blood on the fence.

When you have found everything, Norman will say "Well, I've seen all there is to see."

Acquisition: Play at least two games with Shaun and buy him candy at the candy stand. The games you can play are:

Got To Remember! (Bronze)[]

Acquisition: Remember when you got to the park and what Shaun was wearing. You arrived at 4:10, but the closest choice is 4:15. His coat was beige and his pants were green. All the correct choices are "X".

Acquisition: Talk the robber out of shooting Hassan by following these steps:

Acquisition: You must leave Ethan's apartment without being spotted by pesky journalists. Head out the back, jump over the fence and walk through the alleyway to get to your car.

Acquisition: Knock down at least 50 people while following Jason at the station.

Acquisition: Choose the correct locker on the first try. Find row 18, and it'll be number locker 3, the top one.

Acquisition: Shoot Nathaniel Williams when he aims the gun at Carter Blake.

Acquisition: Do not shoot Nathaniel, even when it looks like he is grabbing a second gun.

Acquisition: Take care of the baby without making one mistake (i.e. causing the on-screen button to turn red).

Acquisition: This is possibly the hardest single-chapter trophy to obtain.

The description states that you must complete the entire trial without making one mistake. This is wrong. You can complete the trial without making a mistake (in the sense of missing one or more of the QTE prompts) and still not get the trophy. You have to take the best route down the highway (as detailed in the walkthrough) in order to get the trophy. Pausing the game to focus and plan your route may help.

Acquisition: Complete the trial successfully. Perform the majority of the buttons correctly. If done correctly, you will drive off the highway at the end, but it is still possible to receive the trophy by successfully performing the QTEs near the start of the drive but failing the ones close to the end (leading to Ethan crashing the car off the highway).

Acquisition: Beat Miroslav Korda in the cold storage after chasing him through the market. You must complete the majority of the button sequences.

Acquisition: Defeat Gordi Kramer's two bodyguards, Zoran and Tony, when they attack after the talk with Gordi.

Acquisition: Give up or fail this trial. The glass or electrical capacitors injure Ethan. Take enough damage and you will automatically fail, returning to the motel. There is also a door to the left before the maze labeled "Coward" through which you can exit to fail.

Acquisition: Do not stop Blake from hitting Dupré. The easiest way to earn the trophy is to simply set the controller down once Blake starts threatening the psychologist.

Acquisition: You must find the disinfectant (in the bathroom cabinet); an axe, knife, or pliers; and an iron rod (heat it using the oven too!) and place them on the table.

You can also find some alcohol and a piece of wood to help "dull" the pain.

Note that disinfecting your finger first is not required in order to obtain the trophy.

Acquisition: Simply cut off your finger using the saw or the scissors.

Acquisition: Correctly hit the button sequences to escape from the window, and maneuver through traffic until you reach the subway. Get on the train before Blake reaches you.

When you go out the window and the cop spots you, head straight toward the subway. Go as straight as you can when weaving through the stopped vehicles; you'll get caught if you go left or right.

Acquisition: Let Ethan get arrested by Blake. Just failing the sequences is the easiest way.

Acquisition: Play the piano without hitting a wrong note. The trophy can still be received if a QTE is missed while Norman is "testing" the piano, before starting to play music.

Acquisition: Force Norman to resist the Triptocaine. You will only get the opportunity to do this if Ethan escapes in "Fugitive."

Acquisition: Switch off the camera in the surveillance room before helping Ethan escape using the raincoat on the chair and the keys on the officer's desk.

Acquisition: Do not drink Adrian Baker's beverage. Refuse it, or simply don't drink when you have it in Madison's hands.

Acquisition: Escape from the rope restraints before Baker returns. (He goes to answer the door at least twice.)

Acquisition: Search the scene for clues and locate a body in the acid bath. Mad Jack will confront Norman and a fight scene will occur. After the interrogation, Norman will experience Triptocaine withdrawal; do not follow the QTE prompts when he does. Mad Jack will knock Norman out, and he will awaken in his car as it is about to be crushed. Escape from the car and survive the second, much longer fight against Mad Jack to receive the trophy.

Acquisition: Prepare a decent omelet before Lauren comes out of the shower. Scott should say something like, "The eggs should be ready by now." Note that not only do the eggs have to be fully cooked, but they have to be on a plate on the table before Lauren returns from the shower.

Acquisition: Follow John Sheppard around the construction site without making one mistake.

Acquisition: Take off no more than one clothing item during the strip tease by grabbing the lamp at the first opportunity after said piece of clothing is taken off.

Acquisition: Do not forgive Madison.

Acquisition: Escape the police at the motel by climbing onto the roof. Jump off when you are given the option.

Acquisition: Save Lauren from the car. First, free her from her restraints. Then, kick out the passenger window. You will both make it to the surface.

Acquisition: Do not get shot during the intense shoot-out at the Kramer mansion. Respond very quickly to the buttons that show up.

Acquisition: Use the medicine in the drawer to save Charles Kramer.

Acquisition: Complete this trial by drinking the poison the killer has left for you.

Acquisition: Work out where Shaun is being held. You will only be able to get this trophy if you have completed at least three of the trials, but not all of them. Guess correctly from the available choices. The correct address is 852 Theodore Roosevelt Road.

Acquisition: Make your way through the burning apartment and work your way to the kitchen. (There is a filing cabinet and a chair that must be knocked over.) Clear out the fridge and hide inside to survive the explosion.

Acquisition: Save the Origami Killer before he falls, with Norman or Madison. Perform the correct button sequences and choose to help him up.

Acquisition: Have all three characters show up at the old warehouse and lose.

Note that Norman does not need to die to obtain this trophy, but the other two events must occur.

Acquisition: Finish Heavy Rain in any way. Who dies and lives does not affect this trophy. Even if the player receives the worst possible endings ("Helpless," "Smoking Mirror," "Dead Heroine" and "Unpunished"), they will still receive this trophy.

Chapter(s): The Bear, The Butterfly, The Lizard, The Shark, The Rat

Acquisition: Find all the clues with ARI (at the crime scene, Mad Jack's garage, and the Blue Lagoon). You must also find the Origami Killer. It'll take almost all the playthrough to earn.

Acquisition: Save Shaun with any character.

Acquisition: See all the endings.

You must not only see the endings but save the endings at least once; otherwise the trophy will not be earned. 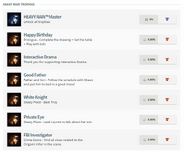 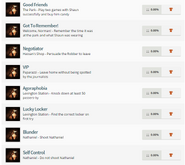 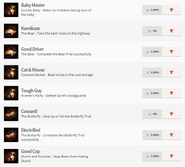 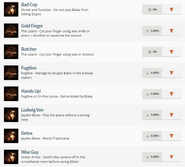 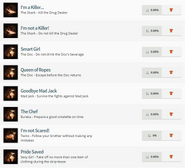 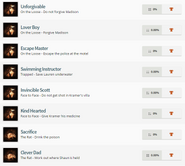 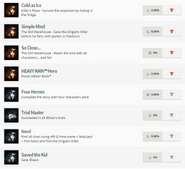