"Twins" is the thirty-eighth chapter in Heavy Rain.

In this chapter, the gravedigger tells the story of John Sheppard to Lauren Winter and Scott Shelby.

John and his twin brother are thrown out of their trailer home by their drunk father. He calls them names and orders them not to come back until their mother returns. The two boys are not surprised by their father's behavior. John's brother wonders what they'll do as it is a wet, cold day. John, however, is happy to be outside as they'll avoid a beating and says a "little rain never hurt nobody." He leads a race from the trailer through a nearby unfinished construction site. During the race, John calls his brother a "slowpoke" quite often. The very last jump down, onto a pile of sand, worries John's brother. He thinks he may hurt himself, but he jumps anyway and lands safely.

After completing the race the boys decide to play hide-and-seek. John's brother counts while his brother hides. (Note that while counting, you can either choose to cheat or play fair.) John's brother then hears John feebly shouting for help. He finds John half submerged in a large broken pipe filled with fast-moving water. John is desperately clinging to the edges of the break, barely keeping his head above water. John tries to pull himself free, but his foot is stuck. His brother tries to help, but it's useless; he says he'll try to get help, but John has to hang on. The chapter closes with John's brother holding his hand and telling him to hang on. 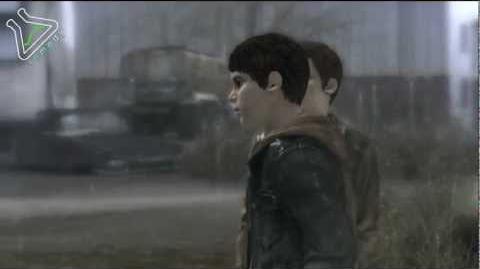