"Where's Shaun?" is the eighth chapter in Heavy Rain.

In this chapter, Ethan desperately tries to find Shaun.

After waking from the blackout at the park, the player must react quickly to avoid a truck that will nearly run Ethan over. (Ethan cannot be killed here, but he can get banged up.) Ethan realizes hours have passed since he was at the park with Shaun; he races back to the park and frantically searches for his son. He finds Shaun's backpack but no people or sign of Shaun's whereabouts. Panicking and desperate, he runs home and searches the apartment top-to-bottom for Shaun, only to burst back outside empty-handed. Ethan falls to his knees and realizes he is holding an origami figure; heartbroken, he yells Shaun's name and starts to cry. 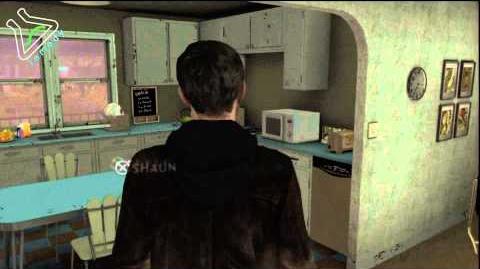